Jun 10th The Heir To My Throne

My wife woke me up at 6:15 Saturday morning of the 10th of May… told me her water broke.

In true fashion of myself, I woke up panic-less.  And to paint even more of a picture of how calm things were, she gave me the option to go to back to sleep since she wasn’t feeling any types of contractions yet… but I couldn’t. Instead I got out of bed, started a load of laundry, did dishes, swept the house… yeah… I got shit done.

Close to 3 hours went by, with a walk somewhere in between–and no contractions yet.  Paps thought maybe we should go to the hospital at that point, and so it was time… time to meet the little man we’d been so anxiously waiting 9 months to see.

When we arrived, they got her changed to “scope out the scene,” and come to find Paps hadn’t even been a whole centimeter dilated yet, but because her water had broke already they’d admitted us into a delivery room.  A Cervidil drip was administered into her IV in place of Pitocin, which was supposed to thin her lady stuff down, in order for her to naturally start dilation.  That was at 10 a.m.

11 p.m she was still not a full centimeter, so they were going to administer some more Cervidil and monitor her for another 12 hours, but instead decided to deliver Pitocin to the body.  Pitocin, for those that don’t know, is supposed to induce labor at a rapid pace.

So this has been all nice to read and informational and such, but here’s the turn… The nurse I had been telling the wife I didn’t like (because of her obvious negative body language she put off every time a question or an apparent “favor” was asked of her) had placed her on Pitocin and said they were going to steadily increase the levels so as not to stress her body or the baby out.

This was supposed to happen every hour.

I took a nap and woke up around 2 am to see that Paps had been working through some contractions on her own.  After I’d knocked the sleep off my face and realized what was going on, I got started with these lamaze breathing exercises we’d learned in class.  However, Paps didn’t start having contractions that required her complete focus until about 6 am, which brought tears… and because of a labor and delivery prep class we’d gone to, we’d been holding off from her getting an epidural till she hit 5 cm. because we were misguided/mis-informed that 70% of mothers who receive the epidural before 5 cm. end up having to get a C-Section.

*Note* As glad I was to go through these classes and pick up tips… this specific passing of information was a very irresponsible misguiding of information based on someone’s preferences, inevitably putting our child in jeopardy for infection and unnecessary stress which leads to problems during the birth.

What was happening is that because baby JR never dropped (basically he was still sitting practically where he’d been the whole pregnancy…up in the stomach) Paps never got dilation going, and since dilation was going so slow but all the amniotic fluid was already all gone, JR was prone to infection without either me or Paps realizing it.  The contractions she had been having throughout the hospital stay (which at that point was about 21 hours) had only gotten her to 3 cm, and for those that don’t know… you need to be 10 cm to get the party started.

Well at that point Paps had started crying in pain.  It’d been hours with working through contractions and there wasn’t a finish line in sight.  I’d gone and talked to the nurse about at what point we’d have to administer the epidural since nobody was willing to check her dilation anymore in order to save the baby from infection from constant probing.  The nurse then asked me why we were still waiting for the epidural…

The nurse explained to us that we were slowing this process down and causing risk by holding out for the epidural till 5 cm.  She told us that because it was Paps’s first baby, her body wasn’t naturally doing what it needed to be done to pop the baby out, and her body was instead fighting the contractions.  Long story short…. the contractions were making her tense up working against the contractions that were supposed to be opening here up.  The epidural used with the Pitocin was going to solve this dilemma.

At some point, I’d made a last minute decision to save the baby’s cord blood and tissue at a bank using StemCyte.  It’s something I’d been thinking of off and on, and was leaning more to the side of signing up for it.  I thought I missed the boat being that I was told we would’ve had to have signed up for it a week prior to delivery date… but once again… false information.  But being that Paps’s mom recently left us due to complications with Multiple Sclerosis… saving the blood and tissue just made me feel a little better in case of the unthinkable, and it was sincerely cost efficient compared to losing my son.

I left the cheerleading squad that had been there practically the whole time (her family and my mom) to play Balderdash as I went to go enroll to have the cord blood and tissue collected, and by the time I’d finished enrolling and snagged a bite to eat, people were looking for me…. IT WAS TIME TO PUSH!

Ah man… at this point things happened so fast.  My wife was already getting into position for her first push as I walked into the room.  The epidural mixed with the Pitocin had turned my zombie wife into a confused hot mess.  But in her nature, she fought a good fight and pushed hard (figuratively and literally).  No longer than 45 minutes later, my son was born.

Baby Jake came out.  He graced us with his presence.  He was my wife’s mother’s day gift, and he was a gift to us all. 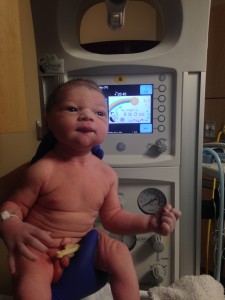