“Should I go get another pregnancy test?”

That’s what my wife asked me sometime during the last week of September.  She asked about getting another one because two she had already taken some weeks prior had failed; but her boobs had been sore and kept her in pain.  I had already assumed the possibility of her being pregnant because she’d been complaining of the pain for probably two weeks at that point, plus she hadn’t had a visit from Aunt Flo (but we attributed that to a car accident we had been in a few weeks prior)… Oh, also because of some physical bodily changes I’d noticed… but I won’t put her business out there.  Lets just say, if my nipples become girthier, I might fear that I may be pregnant.

I offered to go to CVS and go get the test with her, but she went without me.  It was a school night, so I was just relaxing on the couch watching whatever we watch to dumb ourselves down before bed.  Once she came back home she disappeared for about 10 minutes, then returned but went straight to the kitchen and hid from me.  Now I knew that my Spidey sense was 100% right.

I asked her, “well, are you pregnant?” She told me to go into the kitchen, so I did… and once I had, I’d seen that there was the pregnancy test in the oven showing that shit was about to get real.  I am about to be a father.

This paternal feeling I have, has run through my veins for God knows how long.  And the big man upstairs had blessed me with going through life without accidentally knockin’ up some random nobody’s I’d had adult time with on occasion, or exes that I wasn’t meant to be with.  Instead, he blessed me with, what we would find out to be a Wedding Night Baby, with the most perfect person in the world that I can think of, who I literally look at and know that for the rest of my life—I want to be her man.  I mean… It was in my vows to get her pregnant… True story.

I was happy.  I am happy.  But looking back on it, I wish I had been happier, because for some reason, I feel like I let *Paps down, with my lack of 100% Oscar winning enthusiasm.  But I was ecstatic.  I had already started thinking about how we’re going to tell everyone, and I was wanting to call people immediately, yet holding back because I know there’s an information tree you have to follow in order to not hurt peoples feelings and all the jazz…

We wanted to be careful too because we didn’t want to get our hopes up.  We were surround by people we love who’ve had more than their share of tears from complications leading to multiple miscarriages.  With people who we consider family; we’ve had to be on the other side of the conversation where the words no parent should have to ever say had squeaked out of their mouths, and you sit their and feel an empty sadness inside and motionless with thought that nothing you can do or say can make this better.  And I think all that was on my mind in the initial mix.

But we did decide to tell a handful of people.  Our immediates.  And this is where the night kinda collapsed around us.

Now mind you… everyone in every situation has some sort of expectation of how things will go.  My expectation was that we would get to tell her dad in person and experience that facial surprise, or even get to hear it over the phone because God knows he needed to hear some good news.  I wanted to tell my immediate friends immediately and could care less about seeing their faces, I just wanted them to know… and I was going to wait to tell my mom in person so I could record her reaction.  Everyone else, I wanted to record their reactions and put together a video montage and that’s how we would exploit it to FaceSpace once day one of the second trimester had come around.

Well none of that happened.

Paps texted her older sister who just so happened to be with her dad who had just left our house. So he found out through a text that wasn’t even meant for him… so there went that thunder.  My picture text of Paps I sent to my friends; 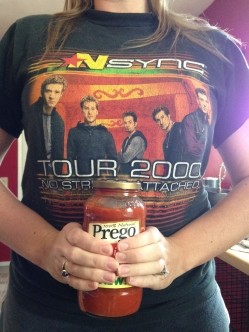 I ended up having to explain that I wasn’t inviting them over for Spaghetti dinner (which I think is pretty funny, because I think the picture was pretty self explanatory), so there went some more wind out of the sails… and to top it off, somehow I ruined the night by making my brand-new-wife-who-just-found-out-she’s-going-to-be-a-mother cry…  CRY!  I don’t even know why or how, but how much of an asshole am I to make someone cry not even 2-hours after finding out we’re pregnant?!?!?

To top it off… we waited to tell my mother in person, and that went really wrong.  So I just gave up on those reactions.  Still, all in all everyone is genuinely happy for us, which is nice, because how that whole deal started off, I was starting to have that feeling of it being my birthday and nobody giving a shit.  I did really enjoy the picture we took to break it to the rest of the world (the background picture of the blog), and looking back on all that rats nest of confusion, who cares…  There’s about to be a little tiny mother effing baby that will give me so many more memories, in which that night will just be another story to share; like I’m sharing it now.