So, for my Valentine’s Day post, I’d written a little ‘ode to fate,’ and while I believe it was fate that brought me to where I am today, I kinda wanted to touch on more coincidences on how I’m seeing things at the moment.  As the title of my blog clearly states, I am a Scared Dad.  Scared of the future, yet excited at the same time.  Scared of the unknown circumstances in my life.  Scared of making the wrong decisions… but most of all Scared of failing.

This is all speculation, and not meant to end up putting me in a loony bin.  Also, there may be mention of God in here, but I promise you it’s not a blog post preaching the “word of the lord”

I’m a huge believer in “everything happens for a reason.”  Also, the old wives quote, “for every door that closes, another one opens,” has been so prevalent in my life, that it’s hard for me not to believe there’s truth in it. 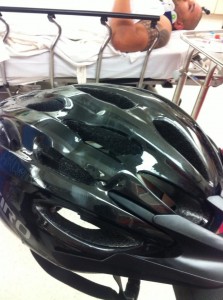 Broken Helmet From the Crash… It looks worse in person.

For instance, I told the story about a big break up that ultimately led me to my wife, A Valentines Day Message: Fate.  In that post I’d mentioned some accidents in there that were supposed to have taken my life, but as God would have it, I walked away practically uninjured.  Like the time I was mountain biking down a hill at 26 mph (that’s 41.84 km/h for you metric folks reading), hit a hole, went flying off my bike, landed directly on my head to the point I physically felt and heard my vertebrae break into millions of pieces; but all in all I walk away with a hairline fracture and some pain that went away in a few days.  My helmet shows had I not had it on, I’d be either dead or a vegetable.

Now what the reason in that is… who knows? Maybe it was trying to wake me up to realize that I’m wasting my life doing things I am unhappy doing.  Soon after, I’d left town for work for a few months, and I’d confirmed this strong unhappiness during my drives to work every day.  I’d damn near be in tears on my way to work for as much stress I endured during that job, for as little I felt appreciated.  This is not like me.  Not at all.  Not to work for praise, and especially not to let stress get to me… and any Marine I’ve ever worked with can tell you this.

There had been another big accident that I have to thank God for waking up every morning from, and it seems after I had survived that, it wasn’t too soon that I’d been seeing 11:11 everywhere.  I’d always just thought to make a wish on it every time I see it on a clock.  You know… children’s superstition.  That same kind of superstition taught to us, that will almost make you black out while holding your breath through a tunnel while you make your wish of winning the Lotto.  I was seeing this number everywhere.

I’d see the numbers on recently reset microwaves, clocks, seemingly every time I picked up my phone to see what time it was… Even on something as rediculous as Starbucks receipts.

Even while traveling to other countries, when my internal clock was all jacked up, I just so happen to glance at the clock and see these four similar numbers reminding me to wish for a better life.  I mention this to quickly quiet the skeptics who are about to tell me how I’ve trained myself to look at that time, like I was one of Pavlov’s drooling dogs… (google it).

I felt I was in a movie starring John Travolta or something.

However, as I started seeing it more and more, I curiously googled “I’m seeing the number 1111 all the time,” and then I got lost in what I’d read for a few hours.  *Here’s where the disclaimer really matters* I’d read multiple sites, and there’s a HUGE community of believers of numerology, and “angel” numbers.  Let me give you a brief explanation;

Angels seemingly want to get your attention, and electronics are the easiest way.  Seeing 1111 often is supposed to be a “wake up and pay attention” calling, begging for the observer to become more aware that things are happening, and mostly for the good.

Recognizing 1111 often is the easiest way to catch your brain’s attention, as are flickering street lights, or any type of anomaly with electronics that is beyond “normal.”

1111 is supposed to be a reassurance that things you are doing are going the way they need to be going, for the best outcome.

It gets more in-depth, and out of control from there, but in all the hours I got lost in it, what I did get from it is that the number 11 is a good sign, that is basically telling you you’re on the right track.

Now get this… I can’t buy into all of it, but if there are angels… they are watching out for me big time, and 11 has been extremely prevalent in my life.

My old life with my ex ended on May 11th, in order for my “fate” story to be written.

I stopped smoking on May 11th, cold turkey, starting a new life for my health.

It’s hard to account this all for coincidence, however, I’m not crazy.  But that number…. 11 ….

Here’s a good one.  I’ve been stressing about applying to grad school.  I finish my Bachelors in Pysch this March, and it’s taken me 11 years to finish (haha… I just realized THAT ONE… WEIRD).  That’s right I started in 2003 after I’d gotten back from Afghanistan, and I finish this March.  Anyway, my dream was to always be a high school guidance counselor, and in order to do that you need to obtain your Master’s degree in School Counseling.  Cool.  So one day I’d been kinda day dreaming, and wanted to see how many colleges offered programs to School Counseling, specifically UCLA, and I came across a program at Cal State Northridge… and it just so happened that they were having an prospective enrollment orientation the very next week.  This orientation apparently only happens once or twice before enrollment, so it was a blessing I had come across it when I had.  A quick look at the time for reference of how long of a day I had left showed me that the time was 11:11.

Going to this orientation, I had once again found motivation for what I was doing in life, and I felt everything was just falling into place, into where I needed to be in life.  Even as I went to go pay for parking, someone left their free guest pass for someone to use, so I felt it even more.  Weeks go by and my enrollment package is due.  On the due date, I wanted to walk my package in, but time was getting a little late so I called in and asked if I could still bring it in (mind you I was trying to make the “early bird” deadline, so I’m not exactly a procrastinator), and I was told to just leave it in the mailbox and mark on it that I dropped it off that day.  Needless to say, I was putting my life into fate’s hands at this moment.

I dropped off the package.

It was all out of my hands now.

It was all over.  But before I walked back to the car, I prayed for everything to work out as I sought out a bathroom to find a literal sign… 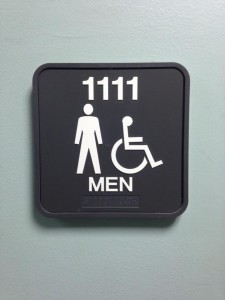 A big ass Kool-Aid smile came across my face, as I knew everything was going to be alright.

I cannot make this shit up.

I don’t know what 1111 is.  I don’t know the meaning behind it.  I don’t know if it’s my subconscious creating a false sense of security for me.  But I do know this; as much as I have stressed out about the future, the baby, the finances, work, anything… When I see those numbers… I say to myself;

Everything’s going to be ok.


Posted in Fear, The Puzzle Piece, Those Odd moments...with 3 comments.